The film PARIS OPERA by Jadran Sturm & Åsa Lie was screened as a backdrop to the two performances also titled PARIS OPERA.

The PARIS OPERA I performance included the film, Jadran on trumpet + voice, Åsa on organ, harmonica + singscreaming: USED, ABUSED AND FINALLY REFUSED, and Djeff on violin, followed by an extension exit & streetperformance .

PARIS OPERA is a film by Sturm & Lie, with a sound improvisation clip from Sturm & Lie's living room. This film also includes an interview by Jadran Sturm & Åsa Lie with Jesus Franco & Lina Romay, as well as clips from the film 'Eugenie De Sade' by Jesus Franco. The rest was filmed by Åsa & Jadran in Paris, France.

The film PARIS OPERA is built as a pyramid in 6 parts with:

WHY WAS THIS FILM & PERFORMANCE BAPTISED 'PARIS OPERA'?

The Paris Opera is strategically placed at a central point in Paris. She is also surrounded by the biggest consentration of banks and financial companies in Paris.

Business proffessionals who have extremly rigid point of views about sex work there. A fundamentalist relationship to sex, which is contrary to the (archaic) origional idea of the opera, which was to show all levels of sexual attractions and desires and how this created passionate pain.

The threat & reality of syphilis is now replaced by hiv / aids. The connection between sex and suffering is equally strong. Historically it was foremost at the opera that all levels of sexual expressions were worshipped & shown.

The Paris Opera was placed at it’s site to illustrate who has the power in Paris. 'PPP' - THE PARIS-POWER-PLACE

The word OPERA simply means 'WORKS' in Latin, the plural of opus.

The structure of the opera culture & the structure of 'high art' or 'fine art' is very similar. It is not available for the ‘mob' or the masses, and the middle-classes are fighting within it to get power. However, the lower classes loved (and love?) the opera singers, even if they can not afford a ticket to the opera, they can buy a CD as they can buy a perfume from Chanel or Gucci, and enjoy the scent... When for ecample Caruso died, the people / mob cried.

The opera is a classwar, even though mainly between the burgoisie and the aristocracy. It is also about power, elitism & money.

Opera takes singing to the border or beyond the border -> symbolising ‘BEYOND THE PALE’, but can not be rejected because of it’s status. The structure of opera is so manifolded, that it is difficult to kill it.

It has always been and is a multimedia show. Grand & visionary, suggerating all the senses.

"If music has been treasured as the purest of art forms, then music written for opera would have to be some of the most impure, for opera owes its power - its considerable and well-documented power - to its combining the musical and the dramatic, the aural and the visual, the emotional and the intellectual. The opera had and has a commanding ability to overcome realist objections to its artifice, to override purist concerns about its mixed artistic nature, to overrule wary doubts about its financial or narrative excesses, and simply to overwhelm the imagination."

"Solo singing / setting of a dramatically conceived melody, designed to express the emotional content of the text it carries, which is accompanied by a relatively simple sequence of chords rather than other polyphonic parts."

"Wagner pioneered a through-composed style, in which recitative and aria blend into one another and are constantly accompanied by the orchestra; this results in a sort of endless melody, which is perpetuated by the avoidance of any clear cadence until moments of great articulation."

"An underlying prerequisite for the creation of opera proper was the practice of monody. Monody is the solo singing / setting of a dramatically conceived melody, designed to express the emotional content of the text it carries, which is accompanied by a relatively simple sequence of chords rather than other polyphonic parts."

A FITTING CONTEMPORARY COMPARISON TO OPERA COULD BE GROUPSEX.

And finally there is PARIS the PRINCE; handsome, rich, with a prospect of power. 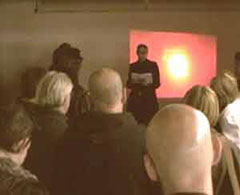 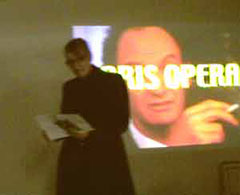 * The film PARIS OPERA was filmed & edited by © Sturm & Lie