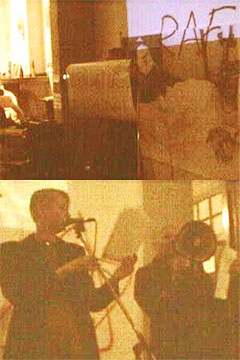 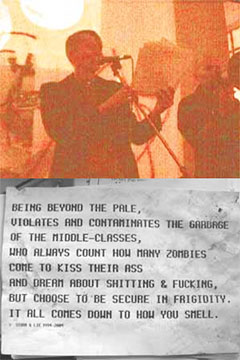 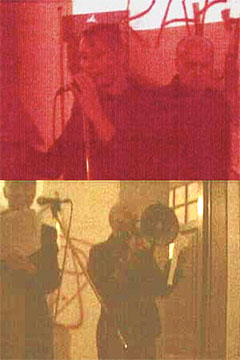 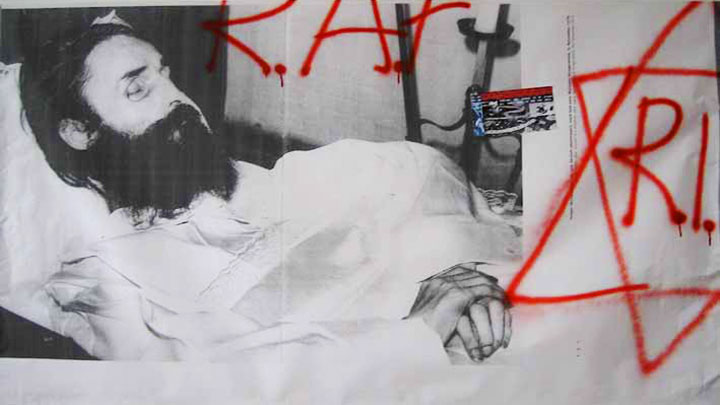 The performance 'Only force or total openness...' at F44 in 'Kunst Macht Dick # 3' August 2004: Sturm & Lie entered an empty space in front of an empty wall. Rolled out a 3m X 2m poster and taped it on the wall. Holger Meins dead 1974. The star, R.A.F. and R.I.P was sprayed on the poster and the wall during the performance. The below image was taped on the poster after it's text had been read. In between the text readings, we asked the audience a question. "Do you shut up and flash down?" See other texts read during this performance further down. The film embedded below was screened partly on top of and above the poster and ourselves whilst performing. (Unfortunately the filmed documentation of this performance is lost.) 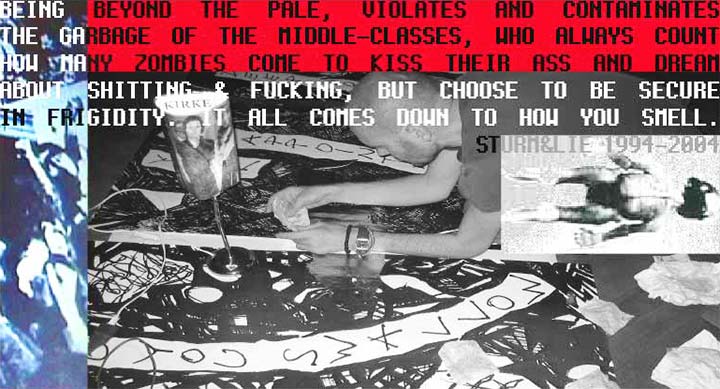 Texts in this performance

It is a terrible thing to kill. But not only others would we kill, but ourselves too if need be. Since only force can alter this Murderous world, as Every living creature knows. It is still, we said Not given to us not to kill. (Declared by the Four Agitators in "Die Massnahme" by Bertolt Brecht in “Collected plays: Three”. Found in the book “Iraq the borrowed kettle” by Slavoj Zizek.)

BEING BEYOND THE PALE, VIOLATES AND CONTAMINATES THE GARBAGE OF THE MIDDLE-CLASSES, WHO ALWAYS COUNT HOW MANY ZOMBIES COME TO KISS THEIR ASS AND DREAM ABOUT SHITTING & FUCKING, BUT CHOOSE TO BE SECURE IN FRIGIDITY. IT ALL COMES DOWN TO HOW YOU SMELL. (© STURM & LIE 1994-2004)

To all men and women of good-will “Anarchism was born of a moral revolt against social injustice.” “I (Malatesta) have stressed the two errors which, in my opinion, Kropotkin committed – his theory of fatalism and his excessive optimism, because I believe I have observed the harmful results they have produced on our movement.” (Sturm & Lie / selected writings by the Italian anarchist Errico Malatesta from “MALATESTA his life and ideas” by Vernon Richards.)

mal di testa Malatesta was a believer in the need for violent, insurrectionary, action, because it was the only way out of the “vicious circle” which he so succinctly defines in these terms: “Between man and his social environment there is a reciprocal action. Men make society what it is and society makes men what they are, and the result is therefore a kind of vicious circle. To transform society men must be changed, and to transform men society must be changed.” hoofdpijn (Sturm & Lie / selected writings by the Italian anarchist Errico Malatesta from “MALATESTA his life and ideas” by Vernon Richards.)

HOW DO I REACH, AND STAY IN, THE CONDITION OF VITA ELEMENTARI? WHEN DO I PASS THE FINE LINE, AND START TO PRODUCE / CONSUME LOOSERS? (© STURM & LIE 1996)

THE DAYS OF ENJOYING BODILY PLEASURES IN WHICH THE BEAUTIFUL, AS IT IS GIVEN, IS CONSUMED. ALL ACTS ARE OF THE ANDROGYNE MODE, CONSTANTLY SUPPORTIVE OF AND DESTRUCTIVE TOWARDS THEMSELVES. (© STURM & LIE 1994)

THERE IS ALWAYS a local inqusition in the nations of FLIPPERTE, UGH-ALITE, BLA-BLATERNITE. political protest – violent resistance – hunger strike - art which makes no-one fat is not permitted - non-existent look at holger meins – a political artist starbuck is in heaven now. We are educated in the school of whoredom - to be Middle-class pantoffels. MORE OR LESS HAPPY PRISONERS IN A GLOBALISED DICTATUR – maxtrist (© STURM & LIE 2004)

THE INSTINCT OF THE HUNT who is the biggest? - who is the grayest? At home we can all kill or abuse. Fuck competition. I see no-one worth competing with. No language, no nation, no family backwards, no religion. And who cares about gender? But history is a mine worth descending into. A warm, dark and spacious place. No-no-no, don’t mistake me for being an academic. There might be a lot of gold on a walkabout, but who is a sparkling diamond? (© STURM & LIE 2004)

In 1933 Curzio Malaparte decided that Hitler was more woman than man, that Der Führer was a lady and published “Une Femme: Hitler”. For this he was sentenced to five years in esilio on Lipari by Mussolini. Was the worst insult Malaparte could think of to call a man a woman? Men who only love men are REAL MEN and know not of their missing knot. However, as we know Malaparte contradicted himself many times & cleverly (+ I am convinced honestly), so I chose to believe HE WAS A REAL HUMAN BEING. The only thing worth being. Woman & man in unity in one being in Ein Haus Wie Ich / Casa come me. (© STURM & LIE 2004) 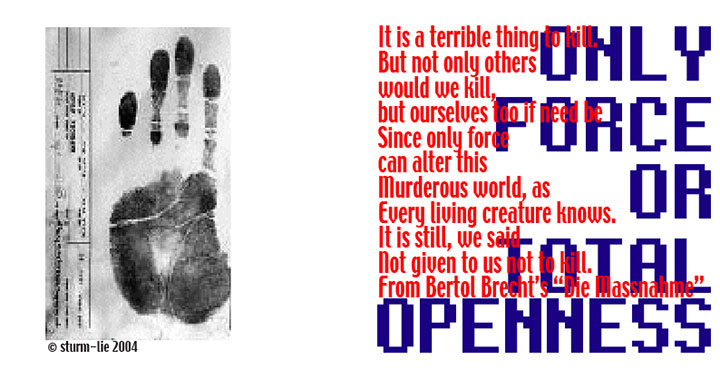 DVD cover for the film 'Only force or total openness...' Embedded above and screened at Factor 44.